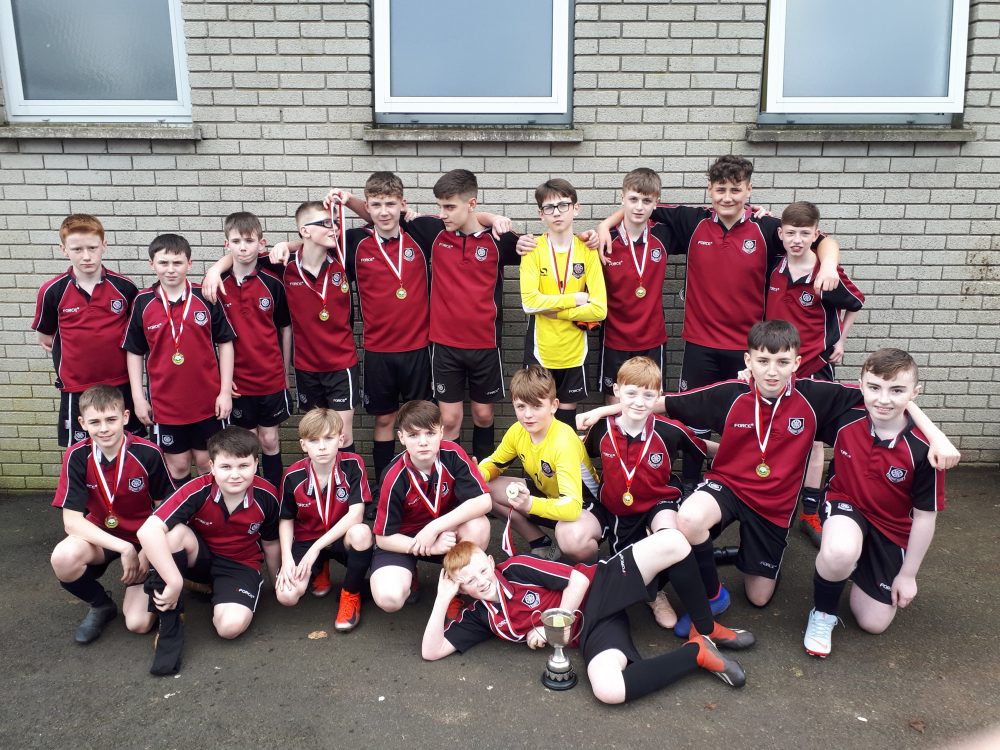 In a rip roaring Mid-Antrim Final at Ballymena’s Showgrounds, Cullybackey College’s Year 9s defied all odds to clinch their first piece of silverware at school, defeating St Killian’s 5-4 in a memorable final. Buoyed on by their 120 strong pupil support, the ‘Men in Maroon’ performed with total commitment throughout, something which was needed in order to beat a very physical St Killian’s team.

Cullybackey got off to a dream start when Isaac Wylie, who had missed the semi-final through injury, scored inside the first three minutes. One became two, just two minutes later, when Wylie scored after a wicked deflection from a goalkeeper’s clearance. With this lucky goal, it just seemed destined to be the school’s day. The whole first half epitomised the preparation that had gone into their season, playing with heart and a real hunger for success. Not one player shied from a challenge; Bailey King-Hay and Joel Aitchison fought like lions, whilst Sam Rock and Harry McNeilly produced performances beyond their years in central defence. Captain Wylie soon found himself with a hat-trick before half time, before the opposition pulled a goal back to leave it as a nervy half time team talk.

Things didn’t go as planned at the start of the second half, two quick fire goals and all of a sudden it was all square at 3-3. Cullybackey picked up injuries to Scott Irwin and Cole Magill which upset the camp, but replacements Sam Gault and Rhyce Brown-Kerr stepped up with aplomb. With the game on a knife edge, the tireless Luke McGaughey set up Isaac Wylie for his fourth goal of the game. Soon after it was 5-3, good work by Josh Nicholl presented McGaughey with a chance, which Robbie Spiers scored with a rebound. It was a nervy last five minutes as St Killian’s threw everything at the Cullybackey defence. Despite conceding a fourth goal, the team stood firm to claim that elusive cup.

Captain fantastic, Isaac Wylie received the trophy much to the jubilation of the home support, without whom this atmosphere and performance would not have happened. This is just rewards for a team who had lost two semi-finals in Year 8 to make their mark in local sport and put their names into the history books at Cullybackey College.