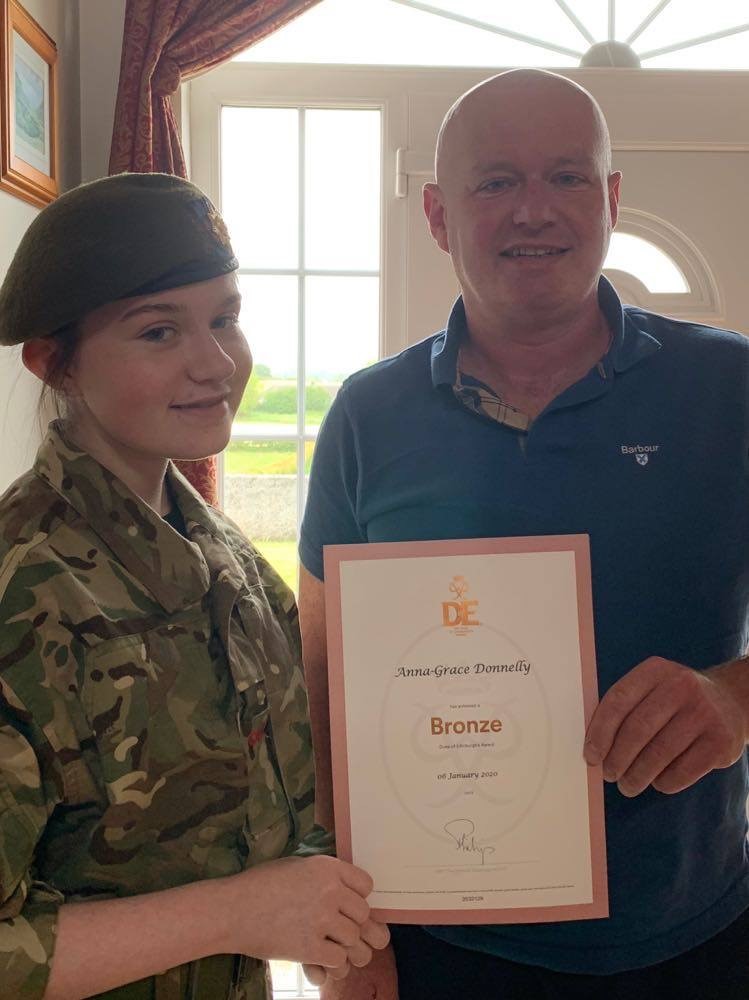 It’s been a Double Success for Cullybackey College recently with two of our cadets receiving awards for their voluntary efforts Pre COVID and during the unprecedented year of 2020.

This National ACF Award was established by Lieutenant Colonel Mike Gerrish who was chair of the ACFA’s Duke of Edinburgh’s Award (DofE) Advisory Panel prior to his retirement from the ACF.  He believed that taking part in volunteering could have a real effect on the local communities with the benefits being felt by the providers as well as the recipients.  The award aims to recognise this within the ACF and to reward the efforts of our cadets and young cadet force adult volunteers (CFAVs).

Lt Stephen Lyons said in her nomination: “Since joining in March 2019 has devoted a great deal of her own time to help others as well as contributing to the environment and image of her local area.  She has motivated others in within her Detachment to get involved in these activities which in turn has led to a great improvement in the perception of the image of the young people in the local village community.  During the time of the restrictions Anna Grace’s contributions where recognised by the Mayor of Mid and East Antrim Borough Council with a certificate of volunteering.  She arranged and took part in litter picks and took part in many of the virtual events including the local church’s VE Day Service.  For her volunteering section of her Silver Duke of Edinburgh Award she took on the home schooling of a younger sibling during the time the schools were closed. This action was of benefit to her mother who is a key worker.  Her volunteering mentioned so far is still continuing.  Anna Grace is an exceptional caring and considerate cadet and in her short time with the Army Cadet Force she has achieved much and assisted many.

The Panel felt very strongly that Anna-Grace’s volunteering epitomised the ethos of the Gerrish Award and of the DofE Award.

“This very junior cadet has achieved much since joining the ACF and clearly lives up to our ACF values and standards”.

Cadet Anna-Grace Donnelly has worked through her Bronze and Silver awards and is patiently waiting until she turns 16 to commence her Gold Award. 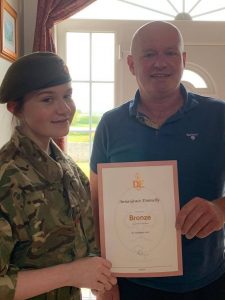 Cadet Lance Corporal Alicia McGorrey has been awarded the Brigade Commanders Commendation in recognition of her efforts and support to the community during lockdown and was the only cadet from 1st (NI) Battalion to receive this great achievement!

This young lady who had previously received the British Force Radio Cadet of the Week was delighted when she was informed that she had been awarded for her efforts during lockdown.

When Cadet Lance/Corporal Alicia McGorrey was asked to assist Cullybackey Community Partnership (CCP) to help make up food parcels and deliver to the vulnerable with the village during COVID Lance Corporal Alicia McGorrey did not hesitate to volunteer.  She contributed to the various virtual events and as a tribute to VJ Day she cleaned the headstone of the Gunner John McIlroy Foster and researched into his story which contributed to the military history around The Craig’s Parish Church, Cullybackey.

HM Lord-Lieutenant of County Antrim Mr David McCorkell who has recently been appointed to the position of Honorary Colonel, 1st (NI) Battalion ACF thanked Alicia for her volunteering in the community.

“Congratulations and well done to L/Cpl Alicia McGorrey on receiving a Brigade Commanders Commendation for all her hard work and commitment in the local community”.

Alicia has also recently completed her Duke of Edinburgh Certificate of Achievement and at present is working on her Silver Award.  Her Brigade Commanders Commendation will be presented formally when cadets return to face to face training. 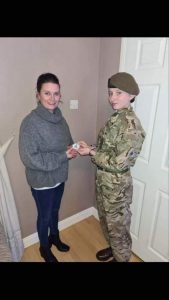 Karen McAteer presents her daughter Lance Corporal Alicia McGorrey with her Brigade Commanders Commendation. She was the only cadet within 1st (NI) Battalion to receive this award.