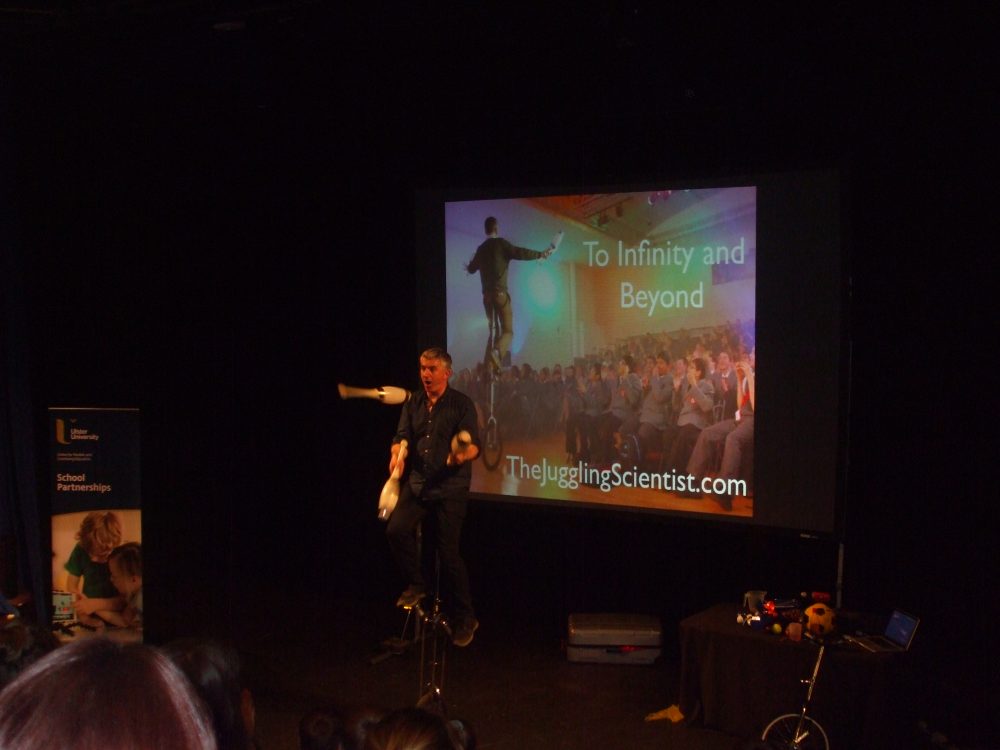 On Wednesday the 18th of October 2017, we travelled on a bus to the Riverside Theatre in Coleraine to attend ‘The Juggling Scientist Show’. When we arrived we went into the theatre and saw lots of other pupils from different schools. We took our seats and waited for the show to begin.

The show started off with a man called James, who came onto the stage and introduced himself. James did some juggling tricks for us. He told us that he used to be a member of the circus and that he was a Guinness World Record holding juggler. James explained to us that Maths is not just about sums, but so much more. James made a character on the computer and programmed it to juggle just like him.

James brought Mrs Harvey up on to the stage. He gave her a beaker full of water attached on to a tray, which he then told her to spin in a loop. This was to show us that anyone can do science and that the force of spinning the beaker and the effect of gravity meant that the water did not spill out. Then James told us all to stand up and jump and explained that if we all jumped at the same time we would all land at the same time, this was to help us to understand about gravity. He told us that as there is no gravity on the moon it wouldn’t be possible to juggle on the moon.

Next, James brought a member of the audience up on to the stage. He told the boy to stand on a skateboard and to push against him. This was to show that although the boy was pushing he could not move James but instead moved backwards on the skateboard. This was to help us understand about forces.

At the end of the show James surprised us all by doing what he called ‘the hardest trick in the world’. This was him juggling skittles while riding on a unicycle. It was very impressive! I really enjoyed the trip to the Riverside Theatre and learned lots of interesting things about forces and gravity.

By: Emma Glendinning 8A2